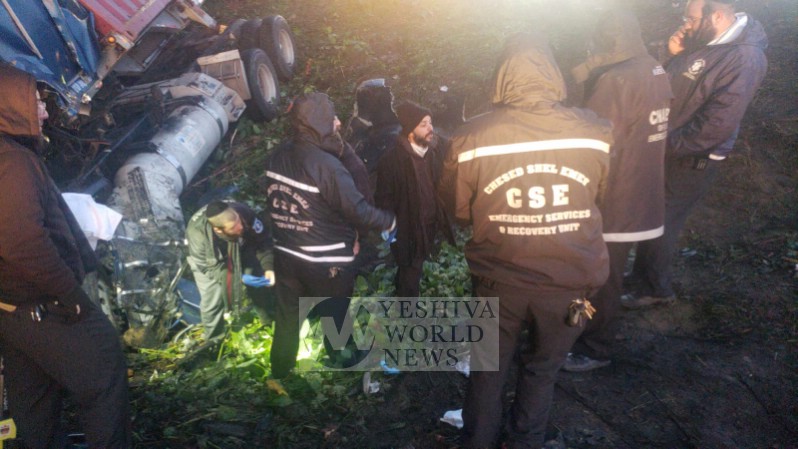 A horrific crash on the NY State Thruway took the lives of two young men from Monsey early Monday morning.

The two men, identified as Moshe Herzog Z”L (28), and Dovid Tzvi Schnebalg Z”L (27), were returning from Pennsylvania where they had spent Rosh Hashanah when the accident happened.

The NY State Police tells YWN that a preliminary investigation determined Moshe Herzog, 27, of Spring Valley, NY, was operating a 2017 Chevrolet Tahoe southbound, near mile marker 29.1, in the center lane, attempting to change lanes and possibly exit the Thruway at exit 14B (Airmont Road). The Tahoe collided with a 2007 Peterbilt tractor trailer operated by Luis A. Velazquez, 59, of Elizabeth, NJ, which was traveling in the right lane.

The collision caused both vehicles to exit the roadway over the right shoulder and come to rest in a ditch along the wood line. The Tahoe became fully engulfed and both Herzog and the passenger, David Z. Schneebalg, 26, of Monsey, NY, were pronounced deceased on scene.

Velazquez was entrapped and required extrication. He was transported to Westchester Medical Center for unknown injuries.

Herzog, who was a longtime Rockland Chaveirim volunteer actually used his radio to call for help – stating that they were trapped in the wreckage.

It took an extended period of time to extinguish the blaze and took hours for emergency personnel to extricate them.

Schnebalg was an EMT who had volunteered his time and helped save many lives.

Video from the scene showed the mangled wreck of an overturned tractor-trailer on top of their vehicle.

Chesed Shel Emes was assisted by Chaveirim Volunteers as they worked for hours to perform their Avodas Hakodesh.

Levaya details will be published when available.